Season 2 of Last Chance U was released on Netflix on Friday, July 21 and after a night of binge-watching, I have some thoughts.

First off, for the initiated, Last Chance U is a show about East Mississippi Community College, a junior college that takes players that either weren’t recruited for anywhere else, but mainly focuses on the players who have fallen from the heights of Division 1, mainly the Power 5. This is brought up as their ticket back to the big time, a penance of sorts in Scooba, Mississippi under infamous head coach Buddy Stephens. EMCC has gained a rep for blowing out people and blowing them out bad due to the amount of talent they can bring in, but they win. And win a lot.

You can’t replace the shock and awe factor of the first season. A coach fighting a ref, a bench-clearing brawl, a student-athlete forgetting their pencil and “accidentally” buying headphones.

The mountain was high, but season 2 is amazing in a different way.

LCU S2 assumes everyone watching has watched S1. There’s no track that needs to be laid down. You have an asshole head coach, assistants trying to do right, Miss Wagner being Miss Wagner and the players, who can be lovable and yet so frustrating.

The focus is definitely narrowed this season, mainly on the players who are D1 transfers. And with eight episodes instead of six, there’s more time to delve in. You can tell the eight episodes took a toll as the last episode seems a bit disjointed and rushed at times.

What’s good to see is that no matter how frustrating the players are at times, they have moments of great clarity and realization, especially in Miss Wagner’s office.

The first few episodes deal with complex issues, such as the fame and fallout of the show’s success (the first few minutes of the season are pure meta) but also problems every football program in America deals with. You have a concussion storyline that is one of the best things on the show because of how raw it is. Concussions are a tricky beast and EMCC does no better than some programs in how its handled.

Another topic that is delved into, probably not enough, is the quarterback who was caught on film punching a woman at a bar. It deals with the stigma of that moment for an otherwise squeaky-clean young man.

The show takes some time to get going, from the second half of Episode 3 through 7, the show is at its best.

The star is Buddy. He wouldn’t have it any other way. He makes an effort to change, or so we believe, and cut down the swearing. But at a certain point, the new Buddy is thrown out the window and the head coach falls into his worst impulses. There’s a brief attempt at character rehab near the end, but its far too late. Buddy’s flip flop from attempted saint to the bull-headed demon is disappointing, but makes great TV.

After watching, no self-respecting assistant coach would want to work with Buddy after seeing S2, especially after the last 10 minutes of the season. He represents the worst of college football coaches. I’m sure the defenders will be out in full force in the coming days, weeks and months from the coaching fraternity, but Buddy had a chance and he failed.

And Buddy will absolutely bring EMCC down with him when he goes down.

If Buddy is the star, the supporting lead is Kam, a Penn State transfer. Unlike Ollie from S1 who had his charming moments despite his problems, Kam is a villain and a locker room cancer. Kam is given chance after chance after events that any sane person would think means the end of his playing career. But he’s brought back in, despite refusing the comply even with the punishments. And to add on to Kam’s evil meter, Buddy coddles him while lashing out at others, mainly Isaiah.

Buddy makes a remark about how Isaiah is going to the Ollie of Season 2 in that people will feel sympathetic to him when he doesn’t deserve it and it irks Buddy to the point you can make a legitimate case that Buddy sabotaged Isaiah’s D1 career. And BTW, Kam is playing in the ACC now.

Miss Wagner seemed to be featured less in S2. There’s only so many times she can chuckle out of frustration. She does get her own feature in an episode, but it focuses on how she’s ready to leave, which she does after the semester.

While these are 18-23 year-olds, they’re not kids. One big negative about college coaches is to call and treat their players like kids. Treat young adults like kids, they’ll act like kids.

One realization I got is that there’s still a great need for black coaches at the college football level. The majority of the players are black, it’s time for that to be reflected in the coaching staffs and administrations.

Based on what I’ve seen, if there’s a Season 3, it needs to be away from Scooba and EMCC. That story’s been told under this regime and Buddy doesn’t deserve the publicity again. He doesn’t deserve a chance to lash out at the cameras another fall or play God with young men that he’s falling increasingly out of touch with. Buddy should thank his stars every night that Coahoma and Delta are in his conference to pad his win totals. And those schools should look themselves in the mirror if they’re sending young men out that have no business competing against EMCC and Northwest and other D1-rehab programs.

By the way, it was really funny to see this guy during Episode 4, entitled “Ain’t it a Sin?” 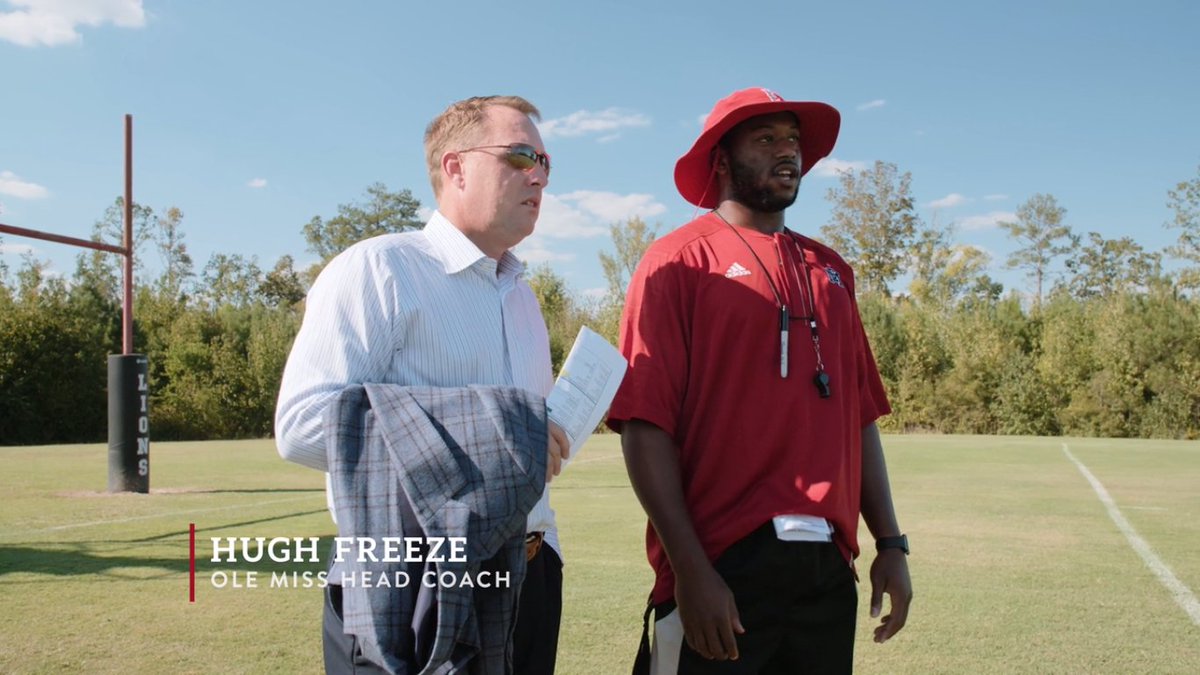