I certainly didn’t mean to take a month between part one and part two of this series, but when George Floyd was killed and it impacted life and society the way it did, it’s important to make sure we stay focused on the right things. Especially in the first, and hopefully only, summer of COVID-19 there aren’t any sports topics that need reactions or timely articles. The writers here were able to put our focus on things other than sports and hopefully further the causes that will help end the problems that caused this tragedy. It was the best thing to do.

Under the surface, coach tendencies become more clear. Not only when coaches try to go for it but how. The easiest decision should be 4th and 1 but general timidness and lack of creativity spoil that.

4th and 1: Bowling Green… What happened?

On 4th and 1, an average run should take care of the yards to go and it should be the easiest decision a coach makes on a Saturday or Midweek #MACtion.

So how in the hell does Bowling Green go 1 for 8 on 4th and 1 on 6 rushes? There were two no plays for penalties. The amazing part is that none of the rushes went backward. They got the line to gain once and had 5 rushes for no gain. There is no way that would happen in another 8 attempts. So sorry Coach Loeffler, good decision making, bad luck.

Buffalo and NIU are relative risk-takers compared to other teams in the MAC. They each elected to pass on 4th and 1 a whole two times. They each went 1 for 2 on those passes. Western Michigan threw the ball on 4th and 1, completed it, and lost yards. That’s pretty rough.

Some other quick hits from the chart:

Let’s go back to the aggressive situation set, defined in part one. These are 4th down and 5 or less to go, past your own 40-yard line, and in the first three-quarters of play.

In this group, I would expect running plays to be favored. Especially after looking at the data from the previous section. Some of the plays in that section won’t be in this group because of the game clock and field position, but of all 127 4th and 1 plays and 97 conversion attempts, there were 6 pass plays called.

Even with a 78 of the 4th and 1 plays counting in this group and only three of them being pass plays, all aggressive opportunities were still one-third pass plays. The 78 plays include punts and field goal attempts.

There were 260 total opportunities on the MAC in 2019. Let’s drop field goal attempts and no plays. Field goals are an attempt at points and there isn’t enough information on no plays to tell what a team was trying to do. Essentially what we have left are punts and conversion attempts.

There were 121 conversion attempts and 58 punts. That’s a better ratio than I expected. The play calling split on those 121 plays is 79 rushes to 42 passes. If we further limit the data, and sample size, by taking out the 4th and 1 plays it results in 24 run plays and 39 pass plays.

That flips the percentage in the pie chart pretty heavily. Run plays went from 65% down to 38%. That might be important to know on the sideline. The MAC is passing heavy outside of 4th and 1.

Miami was the only team to not attempt at least 1 pass play in an aggressive opportunity in 2019. That was odd enough, but I looked into all 7 run plays and found that if it was longer than 2 yards to gain Chuck Martin did not go for it. Not a single time.

And it didn’t matter. His conservative nature was rewarded with a MAC championship. Maybe as Brett Gabbert matures he will feel more comfortable putting these plays in his hands, but in 2019 Gabbert wasn’t given an opportunity once.

You fascinate me, Chuck Martin.

One of my favorite college football brains is ESPN’s Bill Connelly, the inventor of the SP+ analytics system. One of his five factors that generally determine winners and losers is how well a team can covert scoring opportunities into points. Specifically touchdowns.

The idea is that you only have 6 to 14 possessions in a normal football game. When only 4 or 5 get into scoring position, a high conversion rate can result in a lot of wins. SP+ defines a scoring opportunity by getting a first down inside the opponents 40. Once a team has registered a scoring opportunity, how do they do on 4th downs?

Kent State seemed to have some hard and fast rules in this area of the field. If the Flashes are at the 36 or farther back, punt the ball. If it was 4th and 1 or a desperate situation, they attempted a conversion. Any other situation resulted in a field goal attempt. This lead to the lowest rate of conversion attempts in the MAC. The Golden Flashes probably left some points on the board this year. 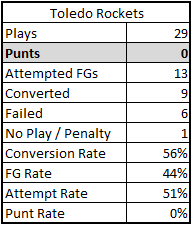 The best decision-makers are the Toledo Rockets. In 29 opportunities with the ball past the 40, they punted zero punts. On most 4th downs they attempted a conversion and they were successful 9 of 15 times.

When the Rockets weren’t being outright aggressive they elected for field goals. There was one field goal attempt in a situation where they would likely convert, but the other factors came into play. It was a 4th and 2 from the 9-yard line. The value of a field goal here is pretty low. It doesn’t cost much to give the opponent the ball on their own 9, but a made field goal would extend their lead late in the third quarter to 10 points. There’s still a lot of game left but a two-possession lead with 20 minutes left is a valid reason. Jason Candle is not costing his team in scoring opportunities.

Just for fun, let’s look at who performed the best when trailing late. Since the decision is either to fight or roll over and lose, I don’t consider the decision to be important here. While it forces conservative coaches to be aggressive, it can show how valuable being aggressive can be.

I’ve defined this as behind in the game by 16 points or less and in the fourth quarter. Teams interested in winning the game should not be punting here.

Frank Solich. What are we doing? In 10 plays that fit the bill, the Bobcats punted 6 times. I can’t be too mad at Coach Solich. They could all be defended by the game situation. Four of the punts were with 12 minutes or more left in the fourth quarter. Both of the other punts were 6 and 8 yards to go from their own 35 and 36. I would like Frank Solich to be more aggressive, but I’ll give a pass on these plays.

Ball State had an average distance to go in aggressive situations of 2.9 yards and Kent State averaged 2.6 yards. In desperate situations, they had 7.0 and 7.8 yards to go on average respectively. These two teams can be creative and aggressive, and they should be when they aren’t forced too.

The Cardinals get to be the Team of Desperation 2019, and I’m not sure that’s a title anyone wants. None the less, in those situations they made the most of them. Only two punts, went for it 8 times and kicked 4 field goals. They were the strongest decision-makers and had good execution. Two of the conversions came in games that they won when they entered the fourth quarter behind. Without those plays and possibly wins, Coach Mike Neu might have been looking for a new job at the end of 2019.

Most of the 1200 plays I logged are punts and field goals. I know there are things to find and learn from in the largest sample of plays I have. I’ll get into that in the next segment.

View all posts by andrewpearson13